This series of large size images (1.5 - 3.5 m) are made with my van - car (Renault Traffic) which was converted into a large Camera Obscura.
The idea of using the van as a camera came after I had been living for 10 months in myParisian studio which I transferred into a Camera Obscura.

Living inside a camera and creating images from inside the camera gave me the possibility to change the reality which was reflected on the walls of the camera obscura and created a new reality which did not really exist. That was achieved by putting objects or people which were actually in the Camera Obscura - room onto the photo-paper during the exposure time.

The large size images also allowed me to add new structures, movements and colours during the process of developing the images.

In classic photography we use chemicals trays where the photo paper is completely drowned inside the chemical - so it develops evenly. With an image 2 or 3 metres long it was necessary to develop it using my hands, sponges, brushes and other kinds of objects all wet with developer so a new atmosphere appeared together with the “new reality” image.

Technical details:
All images are black & white, printed on Baryte paper toned with Sepia and sometimes with more colours. Limited edition of 3 or 5 images, but each image is unique because of the developing process technique. 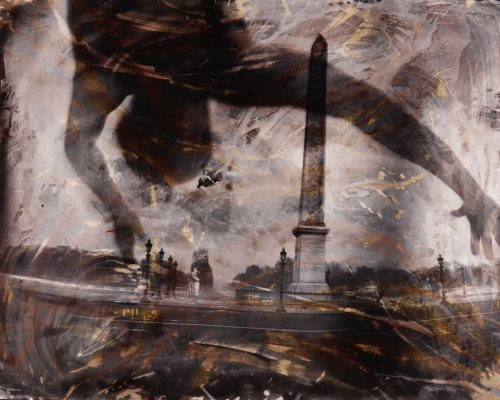